I feel like I had a pretty good lead-off to my post-hiatus posting with a three-pack of longer posts that touched on a couple of different topics – at least a few of which will be revisited in more detail and more expansively as the year winds on!

But, it wouldn’t be a week here without a recap of the things I’ve been doing, and so…let’s chat about the things I did on hiatus from the blog!

Desk Reorganization: I’m fortunate enough to be able to work-from-home in the face of the current pandemic, and unlike a lot of my coworkers (no one has home desks anymore, apparently?), my loadout was pretty well setup for a strong work setup, with a mini-PC desktop from work that I had on the back of a monitor back when we started working from home. Over the past few weeks, I picked up a few things to help clean up and sort my space a bit better, elevating most of my hardware off my desk and giving me room to tuck away and hide my Switch dock, my router, and work desktop! Coupled with new speakers to hook up to my DAC/amp combo, and the setup is getting closer to an ideal and is pretty great to work and play from! 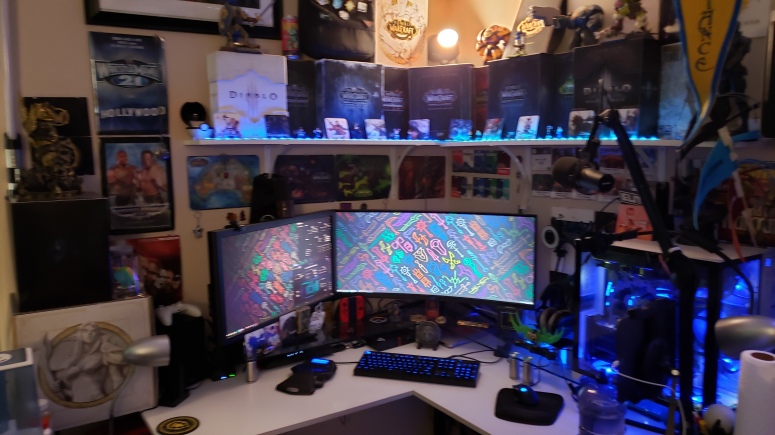 Final Fantasy XIV – Leveling All Of The Jobs: So I’ve been playing a lot more FFXIV lately, and with it, comes the increasing number of jobs that I have maxed out. A large increase in jobs that are maxed out, in fact…

I’ve also started working on more side content – finally doing my first Hunts, unlocking a current-content Beast Tribe with the pixies, and doing raid content weekly. It’s been a lot of fun, even if I currently don’t have a static to push past the normal raid content! By the end of the week, I’ll have Ninja finished with leveling and it will be time to double-down on tradeskills!

WoW: Ny’alotha and BfA Capstones: So…yeah. WoW for me right now is a bit of a deadspot, and as my last post kind of got into, it isn’t even as much about the game itself as it is the place I currently find myself within my guild and the way in which we were continuing content. I still find myself feeling mixed about BfA as a whole, but for what it’s worth, I’ve landed here – I still like the game and Shadowlands looks really good so far, so I look forward to having new content to discuss!

Before bowing and exiting the stage for the expansion, though, I capped off my Ahead of the Curve, we did the Glory of the Ny’alotha Raider meta achievement, and I got my average item level on my demon hunter to 470, as high as it can get (minus maybe a level or two or doing Mythic raiding). To be completely fair, I remain subscribed to the game and with the announced changes to corruptions and the legendary cloak catchup, I might decide to push an alt or two through some content for the sake of it, but for now, I am entirely happy being done with the expansion. A common theme in my writing about goals and endpoints is wanting to reach a plateau, and for BfA, I’m there – full AOTCs, two Glory meta achievements, every class and faction with at least one level 120 character, pathfinder done, and played each role in a raid setting during the expansion. For my sake, I’ve gotten a lot of value out of the expansion despite feeling meh about a lot of it, and so me going on game-hiatus isn’t a move of anger with the game as much as it is that I’ve reached a point of satiation. I’ve had a great helping of BfA content, and I’m ready for a different style!

Other Games: I’ve been dabbling in a few things outside of MMO land. I played a decent amount of Cloudpunk and Disco Elysium, both very good games in my opinion, which do a great job of building up their worlds and infusing them with character. I’ve picked up Tonight We Riot which is a fun looking game, and I’ve dipped into the backlog to check out Final Fantasy XII Zodiac Age, Ape Out, Monster Hunter World, Tomb Raider (2013), and some further dabbling in Rocket League!

Undertaker: The Last Ride: A docuseries produced by WWE, The Last Ride is the first time the Undertaker, legendary wrestling character, has allowed backstage footage and cameras to follow him and has narrated and spoken about his career in candid, real terms. The show started with the intent of following him into his planned last match at Wrestlemania 33 in 2017, but because of the quality of that match (it was, frankly, awful), the show follows him for the first episode leading up to that night, and then the second episode, released this week, shows the fallout of that, with him finally watching the match and being fired up to return and prove he still has it. Spoiler alert – the matches he has had since then have been very mixed as well and knowing that going in makes the whole thing kind of interesting! It is genuinely fascinating, on the one hand – Undertaker is one of wrestling’s most legendary and well-known performers and has been this character for 30 years now. On the other hand, it is an interesting look at the person – Mark Calaway is a sort of mythological figure even more than his character because of how shrouded he has remained and how close to the chest he plays his character.

One negative, though, is that the second episode showed me far too much of the internal muscle tissue of the Undertaker’s hip as a doctor both drilled into his hip bone on camera and described the quality of his body in terms that were a bit too complimentary to be comfortable.

I’ll definitely have more in the pipeline soon, but for now, I think that recaps pretty nicely!